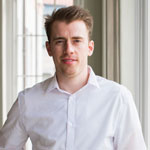 As an immigration specialist, Ford is crucial in supporting the office in the processing of requests and creation of documents, as well as in the maintenance of student, scholar, and office records. He also conducts new scholar orientation.

Originally from Tucker, Georgia, Ford attended the University of Georgia and studied International Affairs and Chinese Language and Literature. While there, he spent one year as an exchange student at Tsinghua University in Beijing. After graduating, he lived in Beijing again and worked as an intern at a mobile apps company.

Ford started his career in international education in 2015 while working as a Student Services Advisor at the University of South Carolina's International Accelerator Program. There, he advised students with lower English proficiencies.